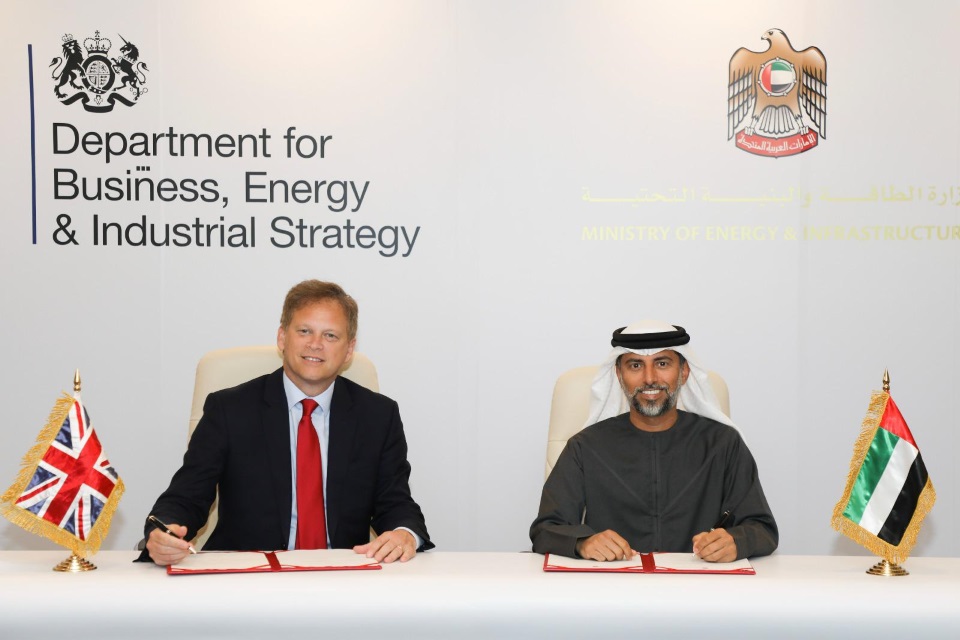 The UK and UAE governments have signed a Memorandum of Understanding (MoU) which will help facilitate the sharing of technical knowledge, advice, skills and expertise, opening up new avenues for cooperation on energy and climate, while boosting jobs and investment in the UK.

The Clean Energy MoU, which today was signed by the UK Business and Energy Secretary Grant Shapps and the UAE Minister of Energy and Infrastructure, His Excellency Suhail Mohammed Al Mazrouei, during the Abu Dhabi Sustainability Week, will further reinforce the robust economic links between the 2 countries developed in the nations’ 2018 MoU on Cooperation in the Field of Energy.

The MoU has been expanded to encompass the full scope of bilateral co-operation, including the new low carbon super fuel hydrogen. This builds on ADNOC – the UAE’s largest energy company – taking a 25% stake in the design stage of BP’s blue hydrogen project, H2Teesside, last year. It also acknowledges the progress the UAE has made so far on climate action, their ambition for clean energy investment and their call for finding energy solutions with like-minded partners.

Additionally, the UAE has also announced a ground-breaking move to collaborate with the UK-launched Breakthrough Agenda, a world leading commitment to make clean technologies the most affordable and accessible option globally by 2030. This Agenda was first launched at the UK hosted COP26 in Glasgow and comes ahead of the UAE’s COP28 presidency year and hosting of the climate conference in Dubai in November and December 2023. The International Renewable Energy Agency (IRENA), headquartered in Abu Dhabi, has helped implement the Agenda.

The UK is immensely proud of its longstanding relationship with the UAE. Today’s latest agreements provide further evidence that not only are we are strengthening our energy security and lowering bills for consumers in the long term, we’re unlocking huge opportunities for investment in British expertise and jobs in the process.

International cooperation on energy and climate with close partners like the UAE is vital and as they take centre stage as hosts of COP28 later this year, they will have our full support every step of the way.

The MoU represents a strengthening of collaboration between the UK and the UAE and follows hot on the heels of the Partnership for the Future (P4F), which was signed during His Highness President Sheikh Mohammed bin Zayed Al Nahyan’s visit to UK in September 2021 and provided a clear statement of our collective energy ambitions.

The P4F is complemented by the existing Sovereign Investment Partnership (SIP), agreed in March 2021 to serve as a coordinated investment framework to grow a future-focused relationship between the two nations, driving economic recovery, jobs and growth.

The UAE have announced a partnership with the UK-launched Breakthrough Agenda ahead of their hosting of COP28 in Dubai in November and December 2023.

The Breakthrough Agenda, launched by the UK at COP26 alongside 45 other countries representing more than 70% of global GDP, is a commitment to work towards a new global green economy, reviewing progress each year and launching new actions at each UN climate conference.

At COP27, countries agreed to deliver by COP28 on pioneering actions to grow the market for green technologies. This included further steps to decarbonise power and transport; plans to develop new investments in green steel, scale up low-emission hydrogen production and shift to sustainable agriculture by COP28.

Over time these actions will reduce energy costs and enhance food security across the world and are set will form the foundation of their COP28 Presidency platform as they play an active role in championing their successful delivery over the course of 2023.

The historic support for the Breakthrough Agenda by the 3 COP Presidencies for COP26, COP27 and COP28 – from Glasgow to Sharm El Sheik and now into Dubai – demonstrates the international community’s increasing ability to collaborate and unite over what the world needs to do to successfully meet the goals of the 2021 Glasgow Climate Pact.

The Breakthrough Agenda has a critical role to play in accelerating global efforts to slash emissions across key emitting sectors.

COPs must contribute to mobilising finance and policy for breakthrough decarbonisation innovations across industries, from steel to hydrogen, and we will work across presidencies to leverage the Breakthrough Agenda for this transformational action to get back on track to fulfil the Paris Agreement.